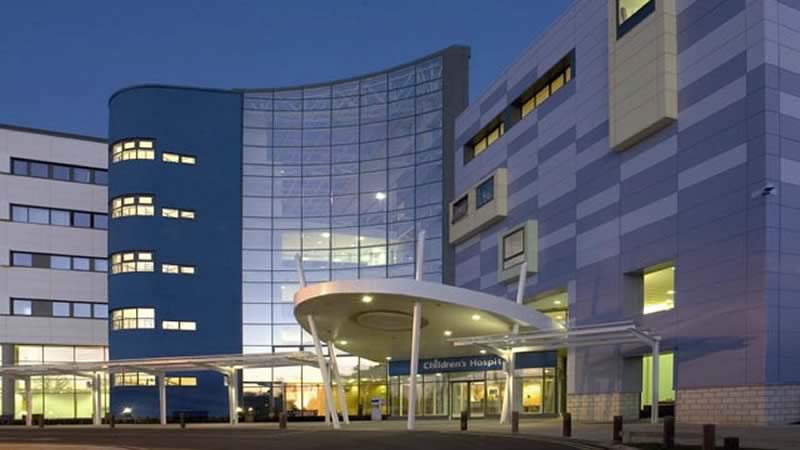 A group of researchers from Oxford Kidney Unit and the University of Oxford has produced the first analysis of whether there is a link between autosomal dominant polycystic kidney disease (ADPKD) and serious biliary tree disease.

The biliary tree refers to parts of the liver, the gallbladder and bile ducts which make, store and secrete bile. Bile has two functions - it helps to absorb fats and oils from our food and it also helps the body excrete some metabolic waste products.

A common disease of the biliary tree is the development of gallstones, which can cause blockages in the bile ducts and consequent problems including pain, jaundice (yellowing of the skin) and infection.

What we already knew:

What this study adds:

This study, published in January 2017, has used data from hospital admissions in England to show that people with ADPKD have an increased risk of being hospitalized for biliary tract disease and its complications, and that biliary complications in ADPKD are actually as common as some of the other better known complications of ADPKD such as hernias and outpouchings of the large bowel called diverticular disease.

The study arose from an observation by clinicians in the Oxford Kidney Unit that there seemed to be a high number of ADPKD patients with biliary tract problems. This led to a search of medical journals for confirmatory studies. This search revealed some scientific papers describing enlarged liver cysts causing bile duct blockage (obstruction) and some reports on patients with infections of the gallbladder. There were no scientific papers to confirm that biliary disease was indeed more common in ADPKD patients than the general population.

The authors therefore started by describing their experience of treating biliary disease in ADPKD patients cared for by the Oxford Kidney Unit over the last 5 decades. They then used a separate dataset to test whether the incidence of hospitalization for biliary complications was indeed more common among ADPKD patients. This dataset was very large and is called Hospital Episode Statistics. It covered a period of 14 years (1998-2012) and all public hospitals in England. From over 43 million people who were hospitalized they found just over 23,000 people with a record of polycystic kidney disease who were presumed to have ADPKD. When compared with a group of “controls” - people without ADPKD admitted to hospital for something else during that time period - the patients with ADPKD were around 2.2 times likely to suffer a complication of biliary tract disease. They were also found to have over 4 times the risk of a serious liver problem. 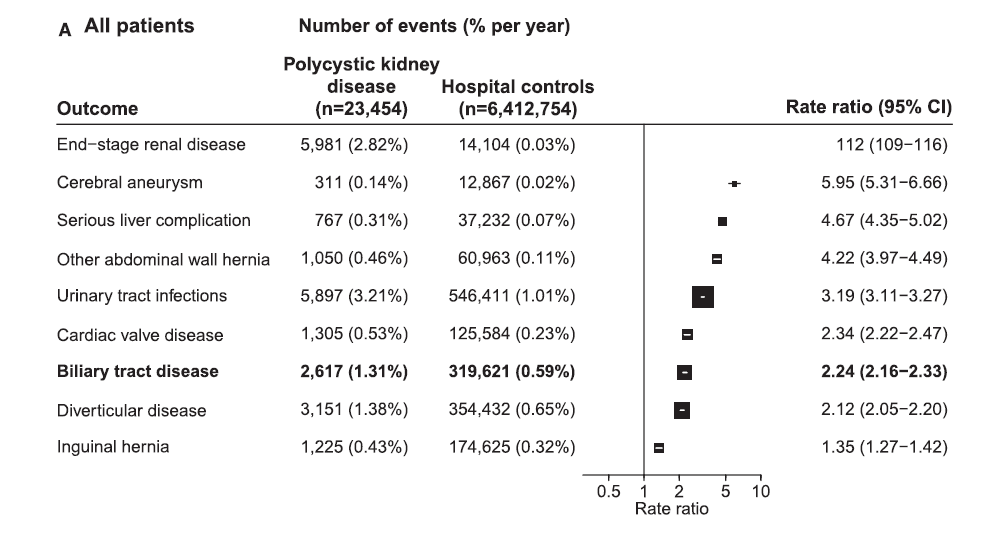 Figure: Strength of the link (rate ratio) between polycystic kidney disease and risk of being hospitalized for certain conditions compared to the general population

The authors made sure that differences in age, sex, other disease could not account for the higher rates of bile duct complications in ADPKD, and noted that the association became less strong when those with late stages of kidney disease were studied (ie, dialysis or transplant patients).

Understanding the figures and comparing risks:

Does the theory fit?

Because we know that liver cysts are common in ADPKD, especially in women, it was reasonable to assume that the cysts themselves would lead to obstruction of the biliary tree. However, the study showed that biliary tract disease in ADPKD is equally common in men and women, suggesting that cystic change is not the only cause of biliary tract complications and that there is a pathological process specific to the biliary tree that is leading to the problems.

It is known that polycystin complexes which are affected by mutations in the genes which cause ADPKD are found in the primary cilia in both the kidney and the bile ducts. In the bile dust they may act as flow sensors or measure concentration of bile. When, in ADPKD, there are abnormal polycystin complexes then this control mechanism may not function properly and so it is reasonable to deduce that the bile ducts might become dilated and that there is stasis in the bile, leading to gallstones.

A key limitation is that this study relied on hospital reports of polycystic kidney disease which may not been perfectly accurately recorded. This means that the observed association may be an underestimate of the truth. It would be nice to see these results replicated in other large datasets.

These analyses suggest that biliary tract disease is more common in people with ADPKD than the general population, and the absolute excess risk is similar to other common and better described complications of ADPKD. Biliary tract disease should be a key diagnosis to consider if a patient with ADPKD develops abdominal pain or signs of infection.