Urinary tract infections (UTIs) are common among people with ADPKD, and are a particular problem for women. These infections should always be taken seriously and fully investigated, because frequent UTIs may worsen kidney function in some people with ADPKD.

If you suspect you have a UTI, seek treatment immediately from your doctor. The infection usually starts in the bladder, but it can spread to the cysts in the kidneys. These infections are more difficult to treat because many antibiotics cannot penetrate into the cyst fluid.

There is no need to routinely check for UTIs in children who have no symptoms. But a doctor should investigate and rule out a UTI in any child with unexplained symptoms such as tummy ache, fever or lethargy. 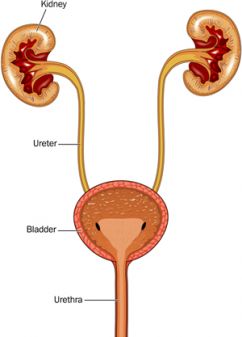 Anyone can get a UTI, but these infections are a particular problem for people with PKD. This is thought to be because the cysts in the kidneys interfere with the normal flow of urine, and even minor delays in the flow increase your chance of an infection. It is also possible that kidney cysts make infections more likely by altering the tissues of the kidneys.

Some people with ADPKD can have frequent UTIs, often from the same germ. This may be due to:

The most common symptoms of UTI include:

You should tell your doctor as soon as you have symptoms of a possible UTI so that you can start treatment as soon as possible.

It is very important for your doctor to collect a urine sample from you for culture. This is to enable the laboratory to grow or ‘culture’ any bacteria in your urine sample to make sure that you can be given the right antibiotic.

If the germ is different with each infection, this suggests that the bacteria are coming from outside the body. If the same germ is found each time, the antibiotics may not be destroying the infection, and you need another treatment.

Any UTI should be treated promptly with appropriate antibiotics. People with ADPKD may need to take a higher dose of antibiotics, and an infection in a cyst is likely to need a longer course of treatment.

Review by a nephrologist or urologist is also advisable, as some people with PKD may need a longer course of low-dose, regularly switched (rotating) antibiotics.

People with PKD can reduce the likelihood of frequent UTIs by:

Women with PKD who have frequent UTIs should:

With thanks to all those affected by ADPKD who contributed to this publication.

Contact us for the version of this factsheet with scientific references.

Disclaimer:  This information is primarily for people in the UK. We have made every effort to ensure that the information we provide is correct and up to date. However, it is not a substitute for professional medical advice or a medical examination. We do not promote or recommend any treatment. We do not accept liability for any errors or omissions. Medical information, the law and government regulations change rapidly, so always consult your GP, pharmacist or other medical professional if you have any concerns or before starting any new treatment.

We welcome feedback on all our health information. If you would like to give feedback about this information, please email

If you don't have access to a printer and would like a printed version of this information sheet, or any other PKD Charity information, call the PKD Charity Helpline on 0300 111 1234 (weekdays, 9am-5pm) or email

The PKD Charity Helpline offers confidential support and information to anyone affected by PKD, including family, friends, carers, newly diagnosed or those who have lived with the condition for many years.