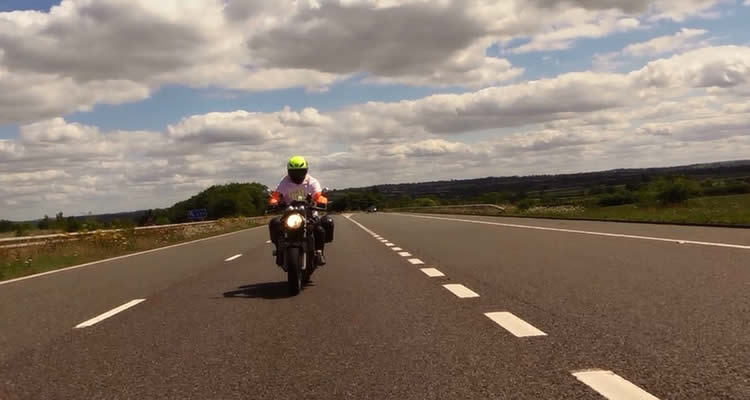 On 18th July, David Morris took on an incredible challenge, and cycled 1000 miles within 24 hours for PKD Charity in honour of his friend with polycystic kidney disease.

Here, David tells us what prompted him to take on this extraordinary challenge:

That's how far an airliner can go in two hours, the jet- and rocket-propelled Bloodhound car in one, or the International Space Station in a little over 3½ minutes. It's further than Land's End to John O'Groats by over 100 miles, more than 8½ laps of the M25 and about 2000 round trips to the corner shop.

Covering the distance within 24 hours is also one of the most demanding motorcycling journeys that a rider can undertake. It is an endeavour that even an experienced long-distance rider finds gruelling and while many contemplate it only a few go the distance. It isn't fun, it isn't comfortable, and it isn't easy-but if it were, then where would be the challenge?

Finding that a friend had been diagnosed with PKD I decided to take on the cramp, fatigue and saddle-sores to raise money for research into the disease. As an experienced long-distance ride leader I regularly ride up to 500 miles in a day and have covered just under 900 in 20 hours-but that was 15 years ago and when I was younger, fitter, and wasn't supported by internal scaffolding following an altercation with a car that left me with multiple broken bones, assorted internal injuries and a long appointment with a couple of surgical teams and the operating theatre – and not to mention a dead motorbike.

Some motorcyclists that do the 1000 mile challenge decide to take in the sights, but this doesn't get the job done and often they fail or barely scrape past the finish line. The initial plan was to ride to the three capitals of mainland UK-London, Cardiff and Edinburgh-on the motorway network but with Wales and Scotland being under greater restrictions than England a modified route was used. Along with a choice of route is a choice of time, an early morning start may seem like a good idea but a long day means your body wants to sleep as it gets dark. Dawn sees the brain try to reset to 'awake' but then there is the danger of severe fatigue which is not a good idea if trying to concentrate and ride. This dictates a ride starting in the afternoon and going through the night which is possible if you adapt your sleep pattern and the night is short then the last leg is ridden in daylight when you are more alert.

The pre-covid plan was to launch the appeal to coincide with my 50th birthday celebration in March, but that turned into a virtual event as the lockdown began. Following a video 'view-in' of the planned speech and appeal launch, the donations began to come in even before the ride took place - which did mean that I would have to complete it-somehow.

Never being without a plan 'B' and an ongoing physio-required exercise bike I was looking at 'cycling' 1000 miles in 24 days rather than riding them in 24 hours. This equates to 42 miles per day, but covering only 40 led to a lot of pain in the damaged knee and hip and discomfort in other places, requiring sleeping face-down that night and the use of a stick to walk for a couple of days. Doing it with a motor attached would certainly be a lot easier.

With the shortest night of the year being on the weekend of the 21st of June that would have been the ideal time to make the trip but it was raining over most of the UK. July 18th rolled around and armed with a sandwich, banana, cereal bar, bottle of water and sleep the ride began at 430 pm / 1630 hrs. The trusty Honda Hornet 900 was fired up and starting near Banbury on the M40 the ride begun. The M25 was circumnavigated nearly twice-with lots of the erratic driving that goes with this road to admire-then it was off on the M4 towards Bristol riding into the sunset with another motorbike for company for a while. The M5 to Birmingham was used to get to the M6 heading to Manchester where the M60 and M62 took me Eastbound via a rather torturous middle of the night diversion through Manchester to the highest point on the UK motorway network. The motorway led over the moors to the A1[M] where I (a keen astronomer) saw the comet NEOWISE near the Moon as dawn broke.

At each of the seven fuel stops I gave the cashier a PKD charity badge stapled to a small information note about the charity and the ride. Along with the 'lots of X-es and an L' size T-shirt big enough to go over the riding kit and some handmade stickers for the bike the charity name was clearly on view during the ride, catching the attention of many passengers in cars that passed or were overtaken. 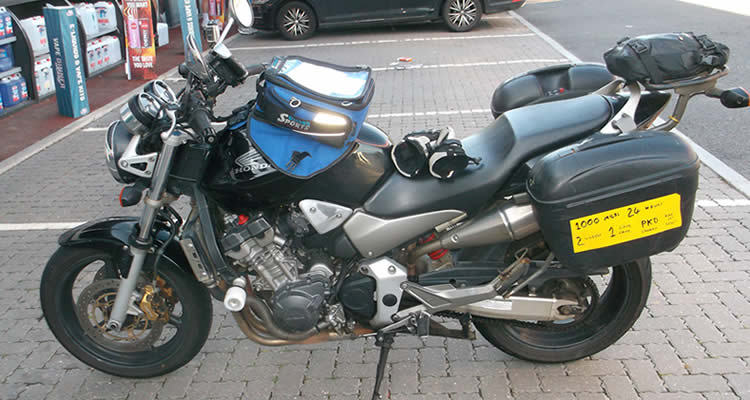 Turning North towards Newcastle on a quiet A1[M] the sky got lighter before a U-turn and a crossing of the Humber bridge long before most people would have got out of bed on a Sunday morning and as an added bonus, like the Dartford Bridge, motorcycles are exempt from the toll.

The last fuel stop of the ride was just after 0700 / 7 am. With 90 miles left to go and still feeing fresh I sent a text to a neighbour asking if they were on for the usual Sunday morning breakfast ride. Two hours later and after some single carriageway roads were used as there was still plenty of time in hand to compete the trip at the new M1 Junction 16 services the ride was complete, taking a total of 16½ hours and covering 1024 miles at an average speed of 62 mph-not bad on a sip of water, one coffee and a cereal bar. The sandwich and banana were eaten later.

From the finish point it was a 14 mile ride home to swap to one of his other bikes and go out again for breakfast-with Carl's wife Rachael making it clear what she thought of my level of sanity with a shake of the head and a roll of the eyes when she heard what he had done. Fitting some cameras to Carl's bike allowed for some 'filler' filming to be done of my bike for the ride video.

I had always wanted to try the 1000 mile challenge and to do it for a good cause makes it all the more rewarding. Bikers raise a lot of money for charity with events large and small and rarely pass a collection tin without popping a donation in. My riding and non-riding friends all gave generously to a charity that researches treatments for PKD and helps those with the condition.

My friend with the polycystic kidney disease is battling on with support from the charity.”

Thank you so, so much to David for his absolutely incredible support in taking on this amazing challenge for Team PKD. To date he has raised £1,346.11 and we are truly are so grateful for his dedication to raise vital funds and awareness, and are so honoured to have him support PKD Charity.

If you would like to support the David as he continues to fundraise and raise awareness, please visit his GoFundMe page. 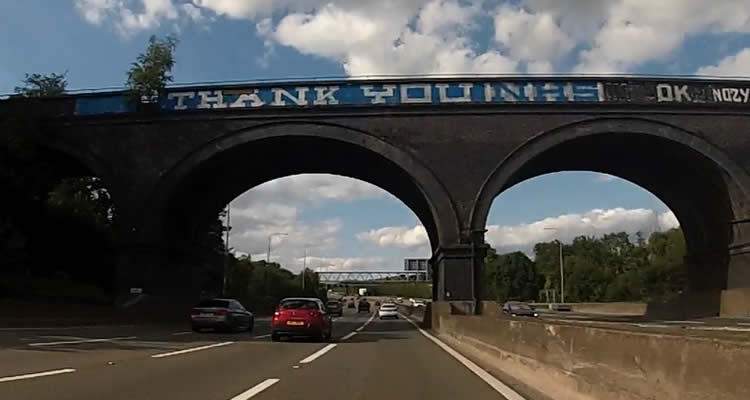